The 20 turbines that harness the natural power of the wind to generate electricity are 1.3MW machines supplied by Siemens Wind Power of Denmark. Each was shipped to Aberdeen docks from where they were transported by road to site. The turbine towers are 46 metres high and have a rotor diameter of 62 meters, giving a total height to the blade tip of 78 meters. The towers, which are made of steel, are bolted onto concrete foundations and the blades are made from reinforced glassfiber.

Civil & electrical engineering work got underway on site in June 2004 and by the end of that year the foundation work for the 20 turbines had been completed and a control building and substation were also built on site. Road material was excavated and crushed on site, reducing heavy good vehicle journeys to the wind farm.

Delivery of the blades, towers and nacelles commenced in February 2005 and the wind farm was fully commissioned and available for full generation in July that year. All electricity generated is sent to the local grid at Huntly and Insch.

Local companies and suppliers were employed wherever possible during construction. Civil and ancillary works were subcontracted to RJ McLeod of Dingwall, near Inverness, who used local subcontractors and suppliers from Huntly, Keith, Kintore, Elgin and Aberdeen.

The location benefits from high wind speeds, resulting in a load factor higher than for a typical onshore wind farm. It is estimated that it will generate sufficient electricity to meet the annual needs of around 13,000 homes, equivalent to more than double the annual consumption of all the houses in Huntly, Turriff and Inverurie or more than 20% of all households in Aberdeenshire.

Emissions or carbon dioxide, the main greenhouse gas, are expected to be reduced by nearly 60,000 tonnes in it’s first year alone. 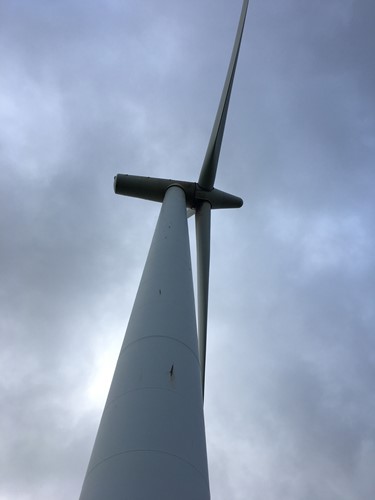